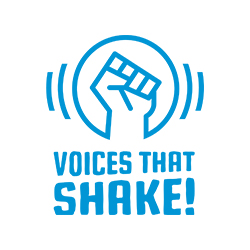 Voices That Shake! brings together young people, activists, educators and artists to challenge social and climate injustice, with a focus on addressing racial inequality.

Using a model of personal transformation and structural change, to challenge established imbalanced power-bases and re-imagine new infrastructures in opposition to capitalism and colonialism.

We build holistic decolonial educational programmes and creative campaigns to foster a catalytic and self-determined community of creative organisers/leaders embedded in and  led by the grassroots. Together we work towards and cultivate transformative justice, systemic change and community accountability.

We work collectively to centre the leadership and solutions of the marginalised, to uplift and politicise the role that young people of colour have, to prefigure the world we would like to live in: diverse, just, sustainable, community-led and resilient.

This Theory of Change was written as a collective effort with the core team, our long-term collaborators and Shake! Participants.

Voices that Shake! was initiated by the London-based arts-activist group Platform in 2010 to intervene in white-dominated NGOs and cultural organisations such as Platform at that time. Shake!’s direction has been steered by Shake!’s young people and facilitators throughout. Platform hosts Shake! in this spirit and through these politics.

After over 10 years of youth-led intensive courses, showcases, mentoring, workshops, teach-ins and one-off events, Shake! wants to celebrate its work and share learning. We have a powerful legacy to disseminate to others, to inspire practices and social movements. Young people’s realities and insights of being in this work will be at the centre.

In Autumn 2021, Voices that Shake! Is launching three publications:

The launch is through a four-city tour of live/online youth-led showcases, workshops for young people, NGOs, funders & changemakers. The cities are those significant to Shake!: London, Manchester, Leeds, Nottingham. Also there will be standalone events such as bookfairs, festivals.

For Us, By Us: Shake!’s legacy of political youth work

Annick Météfia and Haneen Hammou, co-producers of the upcoming Shake! Research report will share their learnings from the experience of researching the impact of Shake!’s radical and political youth spaces in the last 10 years.